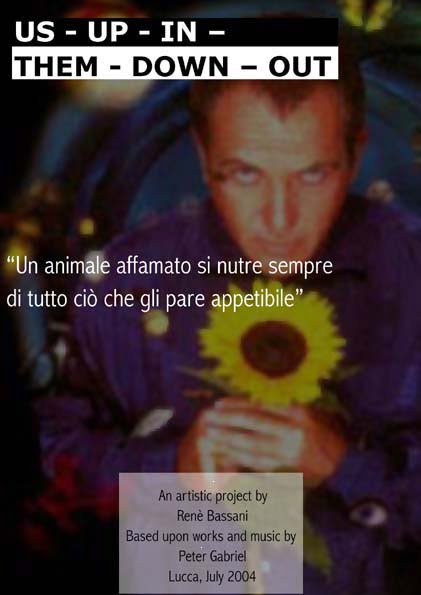 «Us – Up – In – Them – Down – Out: An hungry animal always eats everything it thinks it’s desirable»
~ An artistis project by René Bassani, based upon works
and music by Peter Gabriel ~

An art-work made by a no-artist (from the definition by Brian Eno) about a not-only musician, in a unusual space, a records’ shop. That’s what will be made in occasion of Peter Gabriel’s concert in Lucca.

In the shop «Sky stone and songs – A free land of music, culture and art» in piazza Napoleone from July 16th to July 26th will be created ad art project based upon Peter Gabriel works, called «Us – Up – In – Them – Down – Out. An hungry animal always eats everyting it thinks is desirable».

Three different kind of art work, one put in the shop-window, one inside the shop and the last all around people who visit the artisical installation, with the same themes: bounduaries, cages, boxes and the attempt of trespassing them. In the shop-windows we could see three woody stele – mady by sleepers – which represent three animals (in a very original way), choosen by the artist as representative of past, present and future. So, we’ll see both Peter Gabriel and our childhood and youth (a black Lamb), his and our present (a red Monkey) and finally his and our (hopefully) future wisdom, represented by a white Elephant.
At the bottom of the three stele, three jars in african woods, in which there is white milk under the lamb-stele, red wine under the monkey-stele and clear and pure water under the elephant-stele. Apart from noticing the clear connection to three colour of alchimia, this art work is based upon contrasts: Inside, instead, we find three panels covered by a film, cut without a particular scheme. From those cuts, we read the writing «TRESPASS MY SKIN».
Our final boundary is definitely our skin, which is what divide our essence from everything is outside us. Managing to trespass this final boundary is the ultimate goal we have for getting a global awareness.
But we carry on walking on the contrapositions’ way: if in one side we see the ideal way to get a better world, on the other we see that reality sometimes is different. This reality is shown by a bowl filled with laurel’s leaves. The artist has chosen laurel as symbol of a physic boundary, because the garden of his own home is divided by his neighbour just by a laurel’s hedge. This wants to be a moment for thinking of what is reality: we often talk about important ideals, but we live in our garden, closed by a laurel’s hedge which protect us from our neighbours and their lives. Two faces of the same medail, so: boundary open toward the world but closed on our world, protecting it from intruders.
Theory/Practice
Dreamed Life/Real Life
Utopia/Reality. Then, the whole shop becomes an art-work, thanks to a (false) radio which broadcasts inside it. Another time the artist plays with contradictions: something absolutely free as a radio has been closed in few square metres. This is «Radio Flood», broadcasted from the other side of the moon, a dark place where Mozo lives, almost forgotten from everyone. But Mozo hasn’t lost his primary mission and he carries on destabilizing the world around him. In this special case, he tries to destabilize who goes to see the shop and the art-work. In a music shop, in fact, we can expect to listen to music, instead «Radio Flood» (from the song’ s title «Here comes the flood», that was inspired by radio waves as Gabriel said in 1977) doesn’t transmit music but only words: a words’ floord that overhemls people, who become active part of the work, listening to it and taking words out of the shop. It’s just their taking them out which gives back to the radio its natural freedom and breaks the forced boundary off.